The future is here: how Balenciaga envisons couture in a faltering post-pandemic era

At a time when the fashion business is faltering, Demna is slowing things down. With a show that mixes modernity and tradition, Balenciaga shrugs off the here and now for the beauty of eternity, and manifests how it will dress the world in the future

Everything was painted white in Cristóbal Balenciaga’s old studio in Paris on July 6, with worn-out baroque relief and mirrors attached to the salon doors, reflecting the faces of the whispering guests, wondering what Demna would come up with for his latest collection.

When the door opened, a silhouette wrapped in black neoprene appeared, its head completely covered by a glossy black shield. One by one, eight uniformly faceless nonsexual humanoids marched out while an AI voice recited a French love poem in a flat tone.

“I love you, I’ve loved you for 30 years, I’ve been waiting for you since I was ten, people asked whom you loved and what you want, I closed my eyes, it was you.”

The shield was polyurethane designed by Mercedes-AMG F1 Applied Science. The neoprene is Demna’s interpretation of Gazar, a fabric Cristóbal Balenciaga invented in 1958 with fabric manufacturer Abrahams which created his iconic “envelope dress” in the 1960s.

Invention runs in the blood of Balenciaga. The obsession with technology not only sets the fashion house apart from others but also transforms the essence of a couture show.

Apart from the neoprene, Demna infused aluminum into crinkled T-shirts which made it possible to sculpt them into any shape. Aluminum is also found in the “speaker bags.” Made from solid aluminum blocks, these polished silver accessories are loudspeakers created in collaboration with Danish audio firm Bang & Olufsen which played the soundtrack of the show. The background music moved alongside with the models, soaking the audience into the conversation between the future and the past.

Innovation is not reckless rebellion against tradition but reinventing time-honored tailoring skills with technological breakthroughs. Going through the archives of Balenciaga, one always finds technology as the force for innovation.

The tailors’ craftsmanship can also be found in the show when the all-black look evolved into slightly traditional couture, though the face shield remained. Jet-beaded jeans took thousands of hours to sew by hand; tweed glitters like diamonds under a jeweler’s light; the blue gown with fluttering organza petals and thick embroidery transforms the woman inside into a quavering macaw.

The shields came off in the second part of the show and famous faces took the runway. Nicole Kidman walked in an asymmetric metallic silver gown, the dress rustling as the actor swung through the room. In a signature Balenciaga full-length gown and built-in gloves and boots, Kim Kardashian stole the show. Supermodel Naomi Campbell, pop star Dua Lipa and the French midfielder Eduardo Camavinga also took the stage.

And finally at the end is the veiled woman with a wedding gown made from 820 feet of tulle, 70,000 crystals, 80,000 silver leaves and 200,000 sequins which took 7,500 hours to embroider. It was beautiful in an old-fashioned way, and it was so large that the model could hardly fit through the doors.

Throughout the show, it is obvious that Demna wants a controversial social agenda. The attenuated all-black looks that dragged the audiences into a cold stark dystopian future was how Demna reflected on the pandemic. The tough face shields contradicted the soft, almost water-like flowing neoprene scuba skins, making a scene of a dark sci-fi where technology that represents the future clashed with the orderly status quo.

But Demna wrapped up with the cartoonish pure white wedding gown, bringing hope and love – almost too much to bear – back to the people. And on top of that, the wobbling of the woman at the salon doors again presented a dramatic reminder of how being too loyal to the original taste sometimes blocks someone from moving forward. Such might or might not be Demna’s philosophy, but he certainly again embodied contradictions into the aesthetics of Balenciaga.

At a time like this when the pandemic shattered the fait accompli order, such contradiction meets the changing world and provokes thoughts that Balenciaga, as well as other fashion houses that staged Paris Haute Couture Week, should not simply showcase the latest designs, but address what design means to the industry, and more importantly, where will couture go in the post-pandemic future.

Here for Demna and Kering, Balenciaga’s parent company is where sustainability comes in. Over 25 percent of the collection was made with upcycled pieces including vintage bombers, parkas, car coats, and jeans.

Stepping back from the agenda and humanitarian touch, Balenciaga showcases well-coordinated business strategies. In a previous interview, Demna said instead of silhouette innovation, he was more interested in the process and the creation of content. Each season he designs hoodies, sweatshirts, worn-out denim and parkas, couture versions of the streetwear that he was so good at. The strategy brings surprises to the consumers as it blurs the boundary of the everyday routine on the street and the glamour of couture.

Since Denma took on the role as creative director of Balenciaga in 2015, the century-old fashion house has been on the fast track. Financial reports showed that Balenciaga was among the few Kering brands that turned a profit during the pandemic.

As the world is rolling back on track, Balenciaga has begun expansion. November 2021, it opened a new store in the iapm Mall in Shanghai. This year, it opened new stores in London and Cannes. Its latest move was the grand opening of the “couture store” at 10 Avenue George V in Paris, where Cristóbal Balenciaga opened his store in 1937. 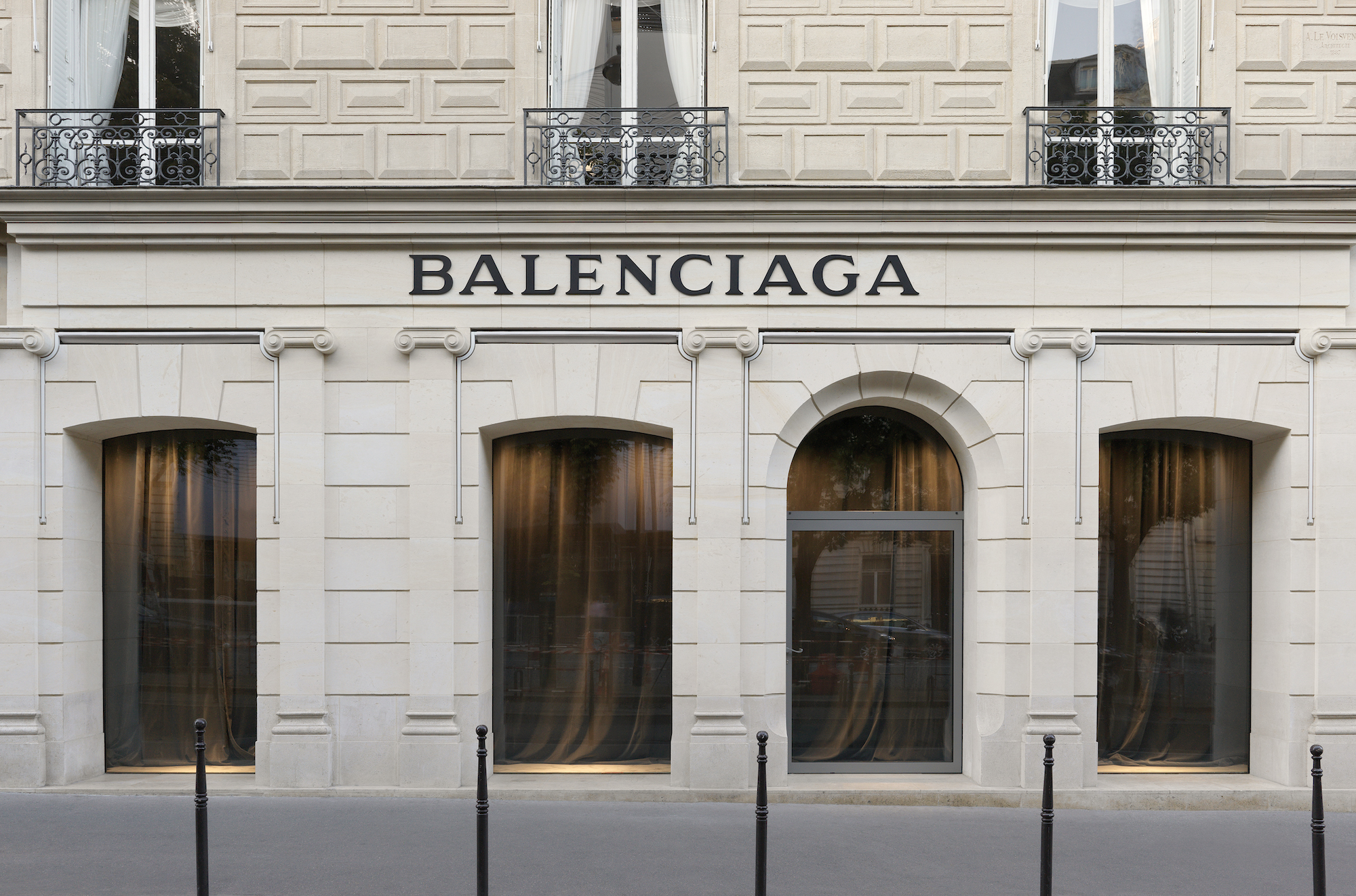 When the fashion industry is becoming a huge assembly line, a couture store seems against the trend. But back in the days, Cristóbal spent weeks or even months embroidering a skirt. Such craftsmanship inspired the next generations.

When Demna relaunched Balenciaga couture, he promised only one show every year. The shop offers collections directly from the runway. Fashion geeks can find the metal-infused crinkled T-shirt and the Trompe l’oeil tweed dress here. Instead of making an appointment and waiting for months, one can simply try them on and take them home. On the second floor of the store is a workshop that offers made-to-measure services, like any tailor shop.

Fashion democracy has been a key issue in the industry in recent years. It is not simply the rise of KOLs on social media with diverse races and genders, but how fashion houses are breaking “the fourth wall” of the show and directly speaking to the people.

Boutiques offer people who can’t be at a show a place to appreciate the designs and be inspired. For a fashion house and designers, a brick-and-mortar store is the best place to communicate with the audience. All collections in the store are open to interpretation, the audiences are engaged with the conversation as they touch the fabrics instead of watching a TikTok video.

Inviting celebrities to shoot commercials and walk the runway is another strategy of to engage with the audience. For quite a while, the face of Balenciaga has been professional models. But on July 6, the sidewalk of Avenue George V was turned into a celebrity-spotting event.

Behind such seemingly extremely bourgeois commercial approach is Balenciaga’s attempt to bring couture back to its prime when the fashion business grew hand in hand with Hollywood.

When a street snapshot of Nicole Kidman wearing a huge pair of sunglasses goes viral on social media, the public is instinctively drawn to the design and philosophy of the fashion house as well. This juxtaposition of progressive design and cliched marketing made Balenciaga stand out in the fashion industry. It is a business fuelled by constant contradiction of legacies from the past creation for tomorrow. Balance is the secret to success.